Have the children been celebrating British Science Week (8-17th March) at school? If you want to continue the fun this weekend at home, here at Mumbler we love a bit of messy play, so grab a lab coat – or an apron – and get the Mini Mumblers experimenting!  The below ideas also might come in handy if we end up with yet more snow days this weekend! 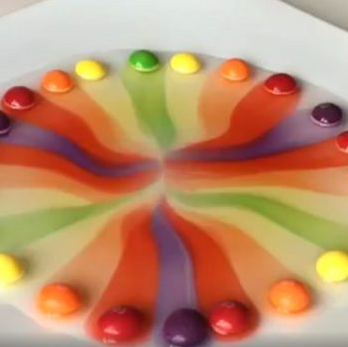 This one is super simple and so visual that it appeals to all ages.

Arrange the skittles in a circle around the edge of a plate, then slowly pour warm (not hot!) water over them.

The colours will start to seep out of the Skittles and join together to create different shades. You can talk about which pigments are darker/lighter than others, and which colours they merge into. Have some spare sweets for the kids to eat too! 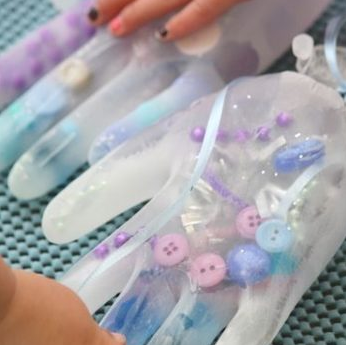 When it’s frozen, peel away the glove and slowly pour warm water (not hot) onto the icy hand (try using a medicine dropper) to melt the ice and dig out the treasures. They will learn about the effect warm water has on ice, and you can talk melting and freezing. 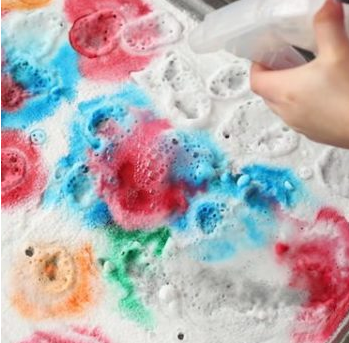 Sprinkle the bicarbonate of soda onto the baking tray and mix liquid watercolours or food colouring into different areas. With a medicine dropper, add drops of white vinegar to the bicarb and watch it foam! You can add glitter too, for extra effect.

What’s Happening? When bicarbonate of soda and vinegar mix, they create new chemicals, including carbon dioxide gas, which causes bubbles. 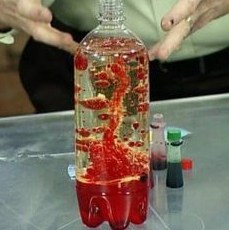 Fill the water bottle about two thirds full with oil, then top up with water, leaving about one inch at the top.

Add ten drops of the food colouring to the bottle, then drop in a quarter of an Alka-Seltzer tablet and watch the lava begin!

The lava will stop once the Alka-Seltzer has fully dissolved, but you can add another quarter of a tablet and the fun starts again!

Tip: If you don’t have Alka-Seltzer, use salt instead.

Put the bicarbonate of soda in the plastic cup/bottle, then add the food colouring. Add the vinegar and water (already mixed).

Stir, stand back and watch…. 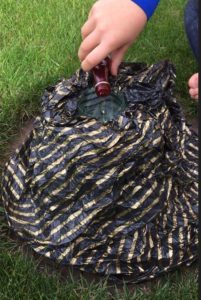 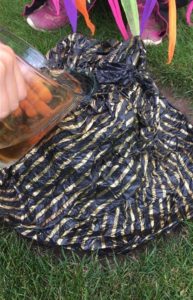 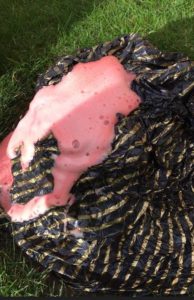 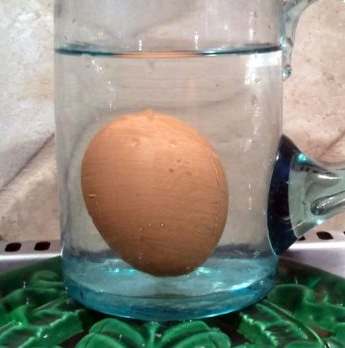 Make an Egg Float in Water

An egg sinks to the bottom of a glass of drinking water – but what happens if you add salt? Learn all about density with this fun experiment.

Stir the salt into the glass of water. Carefully pour more water into the glass until it’s nearly full, but be careful not to mix the salt water with the plain water. Gently lower the egg into the water and watch what happens!

What’s Happening? Salt water is denser than ordinary tap water, and the denser the liquid, the easier it is for an object to float in it. When you lower the egg into the liquid, it drops through the tap water until it reaches the salty water, which is dense enough for the eggs to float in.

Design and Test a Parachute 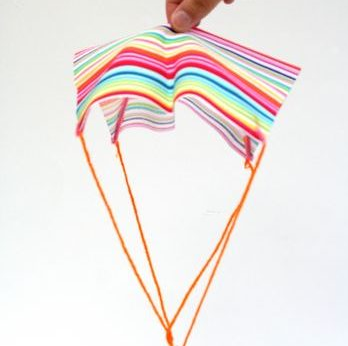 Learn about air resistance while making an awesome parachute!

Cut out a large square from your plastic bag or material, then trim the edges so it looks like an octagon (an eight-sided shape). Cut a small hole near the edge of each side, then attach eight pieces of string of the same length to each of the holes. Tie the pieces of string to the object you are using as a weight.

Use a chair or find a high spot to drop your parachute and test how well it works! Drop it as slow as possible, and modify your design if needed.

Cutting a small hole in the middle of the parachute will allow air to slowly pass through it rather than spilling out over one side, and should help the parachute fall straighter. 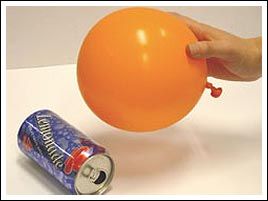 Opposites attract – and that’s certainly true with these fun static electricity experiments! Find out about positively and negatively charged particles using a few basic items. Can you control whether they are attracted to each other?

Rub the balloons one at a time against the woollen fabric, then try pushing the balloons together. Do they want to? Or do they repel against each other?

Rub a balloon back and forth on your hair, then slowly pull it away and ask somebody nearby what they can see. Or look in a mirror!

Put the aluminium can on its side on a table. Rub the balloon on your hair again, then hold the balloon close to the can and watch as it rolls towards it. Slowly move the balloon away from the can and it will follow!

What’s Happening? Rubbing the balloons against your hair or the woollen fabric creates static electricity. The balloons are now negatively charged, while the hair/aluminium can are now positively charged. Since opposites attract, they try to come together!