On Tuesday, we visited Scarborough’s Stephen Joseph Theatre to see the Hare and Tortoise.

We loved it!! Henry and Eliza were captivated throughout. The actors were brilliant and the singing much enjoyed. The bright colours of the set and costumes were very apt.  The audience participation was a great success.

“The hare stopping during the race, particularly for the carrots, especially when a member of the audience shouted “But the carrots aren’t clean!” ” was Henry’s favourite part.

Eliza’s favourite was the “Racing around the theatre!” as the story was literally brought into the audience. 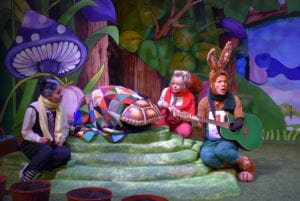 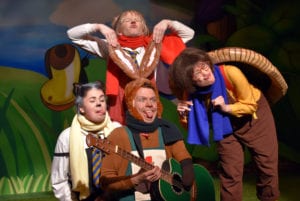 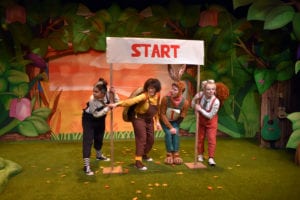 Henry and Eliza have been lucky enough to visit the theatre regularly from a young age. They both thoroughly enjoy a trip to the theatre and it is not something to avoid just because the children are young or perhaps a bit noisy. Every parent in the room will have been there and the children seem to soon settle down captivated in the story being told. A few snacks help! A trip to the McCarthy Auditorium is perfect as it is an all inclusive theatre and so intimate so all the audience are fully involved. Keep an eye out for the next performance for the younger members of the family.

Afterwards Henry was lucky enough to interview the Tortoise (Ceridwen Smith). What an amazing experience for a 6 year old. He had devised the questions himself.

Adapted from the much-loved Aesop’s Fable by Brendan Murray, this show takes the audience through the seasons to witness an exciting race between two competitors who couldn’t be more unevenly matched. Who will win – speedy Hare or slow Tortoise? It really is enjoyable for kids and adults alike. A great activity for the grandparents!

Directed by Cheryl Govan, the SJT’s Associate Director (Young People and Community), the cast features Max Runham as the Hare, Ceridwen Smith as the Tortoise, Georgia Mason as the Squirrel and Ruby Hilton as the Badger. Design is by Julia Wray, lighting design by Paul Stear, and original music is composed by Jack Radish.