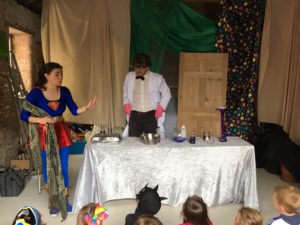 Are you looking for a children’s party provider across North Yorkshire? Preferably one that just “sorts it for you”? Look no further than Magical Quests North based in Malton but are more than happy to travel to Scarborough, Filey and Whitby. They put your child at the heart of the adventure with an exciting and fun filled experience they will remember forever.

Henry chose a superhero party and wow, it was awesome, our house was transformed to a superhero lair with outdoor games (the weather played ball) and a science laboratory. Ceri arrived 45 minutes early (she’d made a quick visit previously to look at the house, know the boundaries and make a plan), transformed the agreed spaces and was ready to go! It was incredible what she did in such little time with not many props!

Once the party started, Ceri took control and the children were completely enthralled, making no fuss, just absorbed in the adventure, training to be “superheroes”. As the parent, it certainly took the stress out of the children’s party and most importantly, the kids had a great time.

We have also been lucky enough to attend a Dinosaur party which was equally good. Ceri is able to cater for a variety of ages all at the same time with no issue and everyone is soon taken in by the story or challenges. The ideas are beautifully thought out, with music and fun. 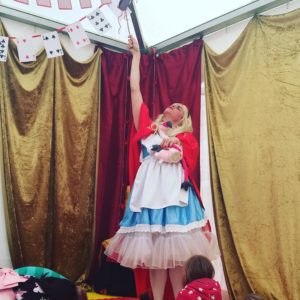 As well as parties, we have also seen Ceri at Malton Food Festival as Alice in Wonderland and as The Worst Witch at Norton Hive. Both times, all ages of children were completely engaged and really enjoyed it. The time went so quick leaving them wanting more. The science experiment in The Worst Witch was such a hit, I had to do another when we got home!

Ceri is also a regular at Humble Bee Farm, Flixton, where she is regularly entertaining guests.

Ceri offers a wide variety of themed parties including pirates, superheroes and all the well-loved classics, from Alice in Wonderland to Beauty and the Beast. All the parties last the full two hours: children see their favourite characters come to life, and are taken on a ‘Quest’ where they help resolve the story, with plenty of active games and challenges along the way. The actors are fully costumed and will work in any venue, nothing seems to be too much trouble.

Here are some other parental reviews..

“What a wonderful job Magical Quests North did. The children were captivated and loved it. The birthday boy thanked me for a wonderful party. All the parents were very impressed. The house was superbly decorated to make it part of the “theme”. Thoroughly recommend.”

“What an amazing party my Frozen mad 4 year old had at the weekend! Ceri was brilliant and brought Frozen to life. I have had nothing but positive comments from parents whose children came to the party, would highly recommend this fantastic lady! Thank you Ceri!” 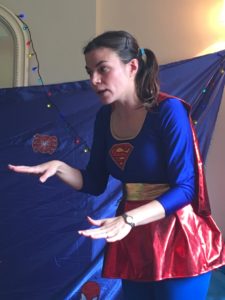 “Magical Quests North did the most wonderful Superhero themed 5th birthday party for my son. They visited the venue in advance and we all knew the plan. They decorated the rooms beautifully and delivered the party perfectly. The children were captivated throughout and they were just brilliant. We had in excess of 30 kids (including siblings) and Magical Quests North meant it wasn’t stressful! Afterwards, the birthday boy thanked me for the “most wonderful party”. Thank you!”

“Magical Quests North made my son’s 5th birthday party truly memorable and stress free. They visited the venue in advance so that they were fully prepared on the day to make the best use of the space and kept in regular contact with me. On the day all the children were enthralled with the adventure and even a couple of those who are usually shy felt happy to join in. They greeted the children as soon as they arrived making them all feel welcome which was a real help to us still prepping the food! The acting and plot ideas were very imaginative. The break for food was carefully woven in to the plot. Many of the parents commented on how much fun the children had and that they themselves had enjoyed watching. It was also a change from the usual party favourites. The certificates were a lovely finishing touch. They were even happy to involve my dad in dressing up and playing a part as it was his birthday too! Varying levels of party type are available for different budgets e.g number or actors etc. Price was very competitive with other entertainers and not per head so extra siblings on the day posed no problems and were easily accommodated.” 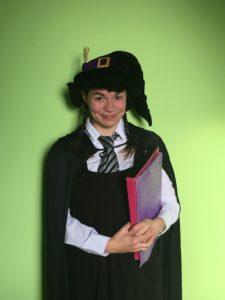 w wow wow!!!!!! What an amazing party! Thank you Magical Quests North SO much for keeping all 9 little ones captivated for an hour and a half and for making Chloe’s special day very special indeed. I have been inundated with messages from the parents saying how impressed they were and that they have beautifully worn out and satisfied toddlers now! It was also the most enjoyable party for me as all the stress was taken away so that I was able to enjoy it too. It was worth every penny and probably a few more besides tbh! You’re a star – thank you!”

“A massive thank you to Ceri at Magical Quests North for making my daughter, Isla’s, 4th Birthday party such a success last weekend. All the kids had a wonderful time and were totally engrossed throughout. Allowing the parents to enjoy some hot tea and uninterrupted conversation! We have a month old baby and I really wanted the party this year to be easy for me and Ceri made it exactly that. From greeting the children on arrival, to taking them off for their adventure and bringing them down for their lunch. I knew they were in safe hands. Thank you, thank you, thank you.”