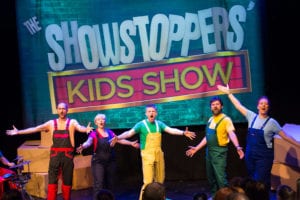 After a sell-out performance at Scarborough’s Stephen Joseph Theatre last summer, the Showstoppers return to the venue with not one, but two, shows.

On Saturday 8 June, the country’s leading creators of improvised musical comedy will present The Showstoppers’ Kids Show in the afternoon, and the Olivier Award-winning Showstopper! The Improvised Musical in the evening.

The Showstoppers’ Kids Show takes kids’ ideas and turns them into marvellous musical adventures from scratch, right away and in front of their very noses.

Together, they’ll explore magical kingdoms as the audience decides where the story is set, what happens next and who the characters are.

Everything is made up on the spot entirely from audience suggestions, but grown-ups take heed – they ONLY take suggestions from kids! If children could create their very own dream musical – where would they start? A doll’s house? A magic castle? A spooky graveyard? From their imagination onto the stage – the Showstoppers will bring their ideas to life.

The evening show, Showstopper! The Improvised Musical, won the Olivier Award for Best Entertainment and Family in 2016.

With eleven years as an Edinburgh Fringe must-see phenomenon, a BBC Radio 4 series, a critically-acclaimed West End run and an Olivier Award to their name, The Showstoppers have delighted audiences across the globe with their ingenious blend of comedy, musical theatre and spontaneity.

A brand new musical comedy is created from scratch at each performance as audience suggestions are transformed on the spot into all-singing, all-dancing productions with hilarious results. These incredible performers are guaranteed to impress as they create shows packed with drama, dazzling dance routines and catchy melodies – it’s just all made up on the spot!

So whether you fancy some Rodgers and Hammerstein set on a ferris wheel or a little Sondheim on Mount Everest – you suggest it and the Showstoppers will sing it!

The Showstoppers’ Kids Show can be seen in the Round at the SJT at 2.30pm on Saturday 8 June, with Showstopper! The Improvised Musical at 7.30pm on the same date. Tickets are priced from £10, and can be booked at the box office on 01723 370541 or via the website: www.sjt.uk.com