Two familiar faces will return to the Stephen Joseph Theatre, Scarborough, for an Easter holiday treat for the youngest members of the family.

Elliott Rennie and Adam Karim will join Alice Kynman in Thumbelina, the story of a teeny tiny girl on a quest to find a friend, which will delight young audiences from Tuesday 10 to Saturday 14 April.

Elliott has been at the SJT for the last two Christmases, in 2016’s Pinocchio and last year’s A (Scarborough) Christmas Carol.

Adam performed in the McCarthy auditorium last year in one of the summer season of play readings, False Flag.

The pair will between them portray 13 different characters including Hans Christian Andersen, Beetleby, Mr Moles and Cedricworm alongside Scarborough actress and director Alice Kynman in the title role of Thumbelina.

Thumbelina is the second in what’s planned to be an ongoing programme of theatre for young people presented by the OutReach department at the SJT each spring and autumn. It follows the theatre’s production last October half-term of Roald Dahl’s George’s Marvellous Medicine, which was a complete sell-out with waiting lists for every performance.

Directed by Cheryl Govan, the SJT’s Associate Director (Young People and Community), the story has been adapted from the original Hans Christian Andersen story by Laurie Sansom. A former Associate Director at the SJT, Laurie went on to be Artistic Director of the Royal and Derngate in Northampton, and then of the National Theatre of Scotland, a role he left in 2016. This year, he is directing Kiss of the Spider Woman at the Menier Chocolate Factory and Nightfall by Barney Norris at the new Bridge Theatre in London.

Cheryl Govan says: “At a time when theatres have been criticised for not having a year-round 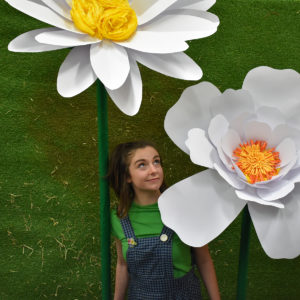 offer for children and young theatre, we’re aiming to plug the gap as far as we can with a programme which includes work for the youngest members of the family in the spring and for slightly older children during October half-term.

“These shows will join the SJT’s existing programme which includes Saturday morning shows for very young people in the summer, and two family shows at Christmas.”